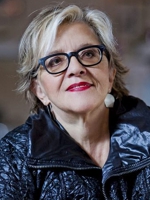 Slavenka Drakulić, born in 1949 in Rijeka, is one of the most famous and most translated authors in Croatia. She publishes essays, novels and non-fictional works and writes for several newspapers and magazines. She works as contributing editor for The Nation magazine (USA). Her work has been published in The New Republic, The New York Times Magazine, The New York Review Of Books, Süddeutsche Zeitung, Internazionale, Dagens Nyheter, The Guardian and Eurozine, to name but a few. Amongst her most noted books are: Balkan Express (1992), Božanska glad (1995), Cafe Europa (1996), Kao da me nema (1999) and Basne o komunizmu (2009). In 2005, she was the recipient of the Leipzig Book Prize for European Understanding for her book They Would Never Hurt a Fly: War Criminals on Trial in the Hague (original title: Oni ne bi ni mrava zgazili). Slavenka Drakulić lives in Sweden and Croatia.