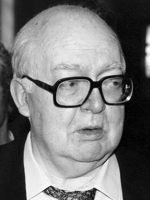 Friedrich Dürrenmatt, born in 1921 in Konolfingen (Switzerland), studied philosophy in Bern and Zurich. He lived in Neuchâtel where he worked as a dramatist, storyteller, essayist, illustrator and artist. Friedrich Dürrenmatt first achieved his breakthrough as a successful dramatist in 1955 with his play Der Besuch der alten Dame (title of the English translation: The Visit). He achieved international acclaim and received several awards for his work, including the Grillparzer Prize, the Schiller-Gedächtnis Prize, the Georg Büchner Prize and the Ernst Robert Curtius Prize. In 1981, he received an honorary doctorate from the University of Neuchâtel. Friedrich Dürrenmatt died in 1990.