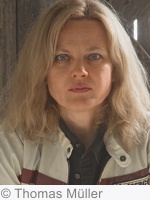 Karen Duve was born in 1961 in Hamburg. In 1983, she dropped out of university where she studied to become tax inspector. For the following 13 years, she was a taxi driver in Hamburg. In 1995, she published her first shorty story Im tiefen Schnee ein stilles Heim and in 1999, her first novel Regenroman (title of the English translation: Rain, 2003). She is best known for her books Dies is kein Liebeslied (2002; English: This is not a Love Song, 2005) (2002) and Taxi (2008, English translation 2010). She received numerous prizes for her work. Karen Duve lives in a small village near Dannenberg.