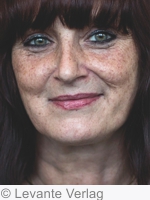 Christiane F. was born in 1962 in Hamburg as Vera Christiane Felscherinow. Her family moved to Berlin in 1968. She grew up in a high-rise building in Neukölln in socially disadvantaged circumstances. The parents’ marriage broke up due to the father’s alcoholism and Christiane grew up with her mother. Already as a twelve-year-old she was addicted to heroin and as a fourteen-year-old she hustled in the girls’ prostitution district in the area of the “Zoo” train station to obtain money for drugs. In 1978 she was discovered by “Stern” magazine reporters Kai Hermann and Horst Rieck, who wanted to make a documentary about the drug scene in Berlin. With their help, the autobiographical book Wir Kinder vom Bahnhof  Zoo (title of the English translation: Zoo Station – The Story of Christiane F.) was developed and successfully produced as a screenplay in 1981 by director Uli Edel under the title “Christiane F. – Wir Kinder vom Bahnhof Zoo” [English title: Christiane F.]. Having become famous as “Christiane F.” Felscherinow attempted a career as a musician and appeared in screenplays. She only revealed her true identity in 1983. From 1987 to 1993 Felscherinow lived in Greece. She returned with her son, born in 1996, to Brandenburg and later on to Berlin, where she lives now. After several media reports that she had relapsed, her son’s custody was withdrawn from her in 2006.