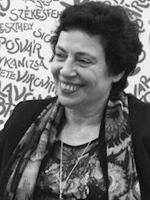 Fedia Filkova was born in 1950 in Jablanica. After completing her German Studies in Sofia she was from 1982 till 1992 an editor for the publishing house Narodna Kultura. She was the foreign policy advisor of the president between 1997 and 2002. Between 1992 and 1995 she was the cultural attaché of the Bulgarian Embassy in Vienna and between 2005 and 2008 the cultural attaché of the Bulgarian Embassy in Berlin. She has translated many literary works from German into Bulgarian, including works by Ingeborg Bachmann, Christa Wolf, Ilse Aichinger, Friederike Mayröcker, Ernst Jandl, Michael Ende, and Novalis. In 1995 she was awarded the Austrian State Prize for Literary Translation. Fedia Filkova is the author of six books of poetry. She lives in Sofia.