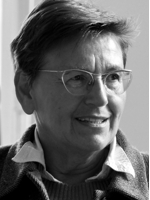 Erika Fischer-Lichte, born in 1943, studied Theatre Studies, Slavic, German Language and Literature, Philosophy, Psychology and Educational Science in Berlin and Hamburg. She was Professor at the Institute for German Language and Literature at the Johann Wolfgang Goethe University, Frankfurt, Holder of the Chair for General and Comparative Literary Theory at the University of Bayreuth and Director of the Institute for Theatre Studies at the Johannes Gutenberg University, Mainz. Since 1996 she has been Professor and Managing Director of the Institute for Theatre Studies at the Free University of Berlin. Erika Fischer-Lichte has published numerous works on the topic of theatre studies. In 2010 she was awarded the Berlin Science Award for her work.