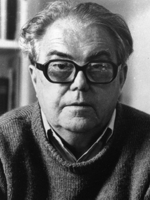 Max Frisch was born in 1911 in Zurich. In 1930 he began his German language and literature studies, which he had to abort after the death of his father due to financial difficulties. He worked as a correspondent for “Neue Zürcher Zeitung” (New Zurich Newspaper) and other newspapers. In 1935, he travelled to the German empire for the first time, where he was confronted with National Socialism and antisemitism. He studied architecture in Zurich from 1936 to 1940.