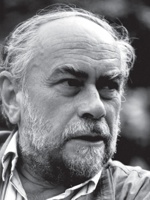 Bogomil Gjuzel, born in 1939 in Čačak, Serbia, is a poet, prose writer, dramaturg, and translator. After he had finished his study of English language in 1963 in Skopje, he spent one academic year at the University of Edinburgh. From 1966 to 1971, and from 1985 to 1998, he was a dramaturg at the Dramski theatre in Skopje. The majority of his opus is comprised of his poetry books, for which he received numerous prizes. His poems were included in anthologies of Macedonian and Yugoslav poetry in over 20 languages. He has translated among other poems of T.S. Eliot and plays of W. Shakespeare and S. Becket.