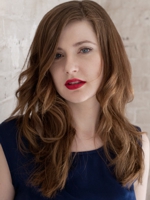 Olga Grjasnowa was born in 1984 in Baku (Azerbaijan), grew up in the Caucasus and lived many years in Poland, Russia and Israel. She has studied at the German Literary Institute in Leipzig. In 2011, she received the Border Crossers Grant of the Robert Bosch Foundation. Her much-noticed debut novel Der Russe ist einer, der Birken liebt (title of the English translation: All Russians Love Birch Trees) won the 2012 Klaus Michael Kühne Prize as well as the Anna Seghers Prize.