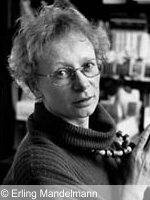 Anne-Lise Grobéty was born in 1949 in La Chaux-de-Fonds, Switzerland. She studied at the Faculty of Arts of the University of Neuchâtel. She began to write early and received for her first novel, written when she was 19 years old, the Prix Georges Nicole. After she had published her second novel however, she stopped writing and rather took care of her children and engaged herself politically for the Social Democrats. Only in 1984, she again returned to the scene with a literary work. She received numerous prizes for her works, including the C. F. Ramuz Grand Prix, the Prix Saint-Exupéry – Valeurs Jeunesse de la Francophonie, the Prix Rambert and the Prix Bibliomedia Suisse. Anne-Lise Grobéty died in October 2010 in Neuchâtel.