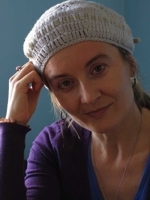 Tatjana Gromača was born in 1971 in Sisak, and lives in central Istria near Pula. She studied comparative literature and philosophy in Zagreb (graduated in 1995) and had been a long-time contributor for the legendary, recently closed down Croatian weekly Feral Tribune, writing literary reportages, book reviews, and articles. Since 2008, she has been a cultural columnist and reporter at the daily newspaper Novi list and has been writing poetry, prose and essays. She received several prizes for her work, among others a grant of the Academy of Arts Berlin.