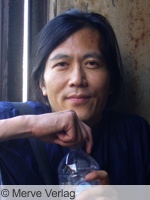 Byung-Chul Han was born in 1959 in Seoul, South Korea. He studied philosophy, German literature and Catholic theology in Freiburg and Munich. He obtained his PhD in 1994 and habilitated in 2000. From 2000 to 2012, he was a professor of philosophy at the Karlsruhe University of Arts and Design; since 2012, he has been professor of philosophy and cultural sciences at the Berlin University of the Arts. He is author of several books on topics such as Heidegger, Hegel, hyper-culturalism, and digitalism. Because he deals with actual topics, he has been named “philosopher of the hour” by the German newspaper Die Welt.