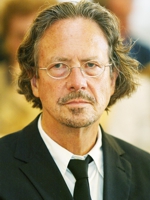 Peter Handke was born in 1942 in Griffen (Austria) and studied law in Graz. Before his final exam, he abandoned the study and published his first novel Die Hornissen [The Hornets]. In the same year, 1966, his play Offending the Audience and Self-accusation was staged in Frankfurt. He subsequently wrote numerous novellas, prose works and theatre plays. Besides writing, he also translated several prose works and plays into German. He received numerous international prizes. Owing to his position to Slobodan Milošević, the planned distinction of his work with the Heinrich Heine Prize initiated a heated debate.