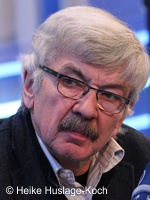 Christoph Hein was born on 8th April 1944 in Heinzendorf/Silesia. After the end of the war the family moved to Bad Düben near Leipzig, where Hein grew up. In 1967 he studied Philosophy and Logic at the University of Leipzig and completed his studies in 1971 at Humboldt University Berlin. From 1974 to 1979 Hein worked as author-in-residence at the Volksbühne (People’s Theatre) Berlin. He made his breakthrough with his prose debut Einladung zum Lever Bourgeoise [Invitation to the Lever Bourgeoise]. Hein has received several awards, including in 2008 the Walter Hasenclever Literature Prize of the City of Aachen and in 2012 the Uwe Johnson Award.