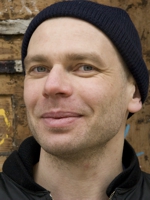 Wolfgang Herrndorf, born in Hamburg in 1965, studied painting and, amongst other things, made drawings for the “Titanic”. In 2002, his first novel In Plüschgewittern [In Plush Thunderstorms] was published, the volume of stories Diesseits des Van-Allen-Gürtels [On this side of the Van Allen Belt] in 2007 and in 2010 the novel Tschick [Tschick] became the surprise hit of the year. In 2012, the novel Sand [Sand] followed, for which he received the Leipzig Book Fair Prize (2012). In addition, Wolfgang Herrndorf was awarded, amongst others, the German Narrator Prize (2008), the Brentano Prize (2011), the German Youth Literature Prize (2011) and the Hans Fallada Prize (2012).