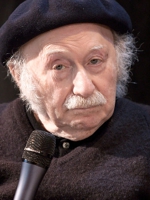 Edgar Hilsenrath was born in 1926 in Leipzig. In 1938, he escaped with her mother and younger brother to Romania. In 1941, his family came to a Jewish ghetto in Ukraine. Hilsenrath survived and immigrated to Palestine in 1945, and moved to USA in 1951. He received the Alfred Döblin Prize in 1989, the Heinz Galinski Prize in 1992, the Hans Erich Nossack Prize in 1994, and the Jakob Wassermann and Hans Sahl Prizes in 1996. Since 1975, Edgar Hilsenrath has been living in Berlin.