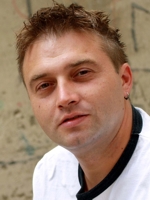 Emir Imamović, born in 1973 in Tuzla (Bosnia and Herzegovina), was a war reporter  in Kosovo, Macedonia and Afghanistan and worked as a journalist for the BBC, ORF, RAI, Radio B92, the magazine Gracija and the most influential Bosnian news magazine DANI. Until now he has published three novels: Je li neko vidio djevojčice, kurve, ratne zločince (2006), Tajna doline piramida (2007) and Treće poluvrijeme (2010). In these he describes the reality of a country, whose inhabitants allegedly demand that they would like to install cameras everywhere so that the rest of the world doesn’t have to miss this reality show.