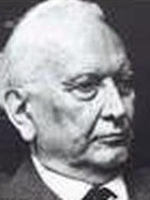 Karl Jaspers was born in 1883 in Oldenburg and studied first law and then medicine. He got his doctorate in 1909 in Heidelberg. During his work as an assistant at the psychiatric clinic he habilitated in psychology. From 1916 on, he was professor of psychology, and from 1921 professor of philosophy at the University of Heidelberg. In 1937 he was deposed from his position until he was reinstated in 1945. From 1948 to 1961, he was professor of philosophy in Basel. He died in 1969 in Basel. Jaspers is one of the most important representatives of existential philosophy. His works – there are altogether over 30 volumes – have been published in more than 600 different translations.