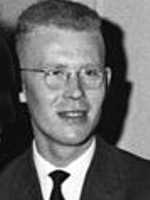 Uwe Johnson was born in 1934 in Kammin in Pomerania, now Kamien Pomorski, and died in 1984 in Sheerness-on-Sea. In 1945, he fled with his mother and sister first to Recknitz, than to Güstrow in Mecklenburg. In 1953, he enrolled in the University of Leipzig to study German language and literature. Already during his studies, he started to work on the novel Ingrid Babendererde. Reifeprüfung 1953 [Ingrid Babendererde. Graduation 1953]. He had sent the manuscript in 1956 to various publishers in the GDR, but all rejected the publication, including Peter Suhrkamp in 1957. The novel was published only after Uwe Johnson’s death. Johnson’s first published novel was Mutmaßungen über Jakob (title of the English translation: Speculations about Jakob). Between 1966 and 1968, he was living in New York, where he wrote the novel Jahrestage. Aus dem Leben von Gesine Cresspahl [Anniversaries. From the Life of Gesine Cresspahl]. The first volume was published in 1970, while parts II and III followed in 1971 and 1973, respectively. In 1974, Johnson moved to Sheerness in the county of Kent. After the move, he had been suffering from writer’s block and that is why the part IV of Anniversaries was not published before 1983. In 1979, he was a visiting lecturer at the Johann Wolfgang Goethe University of Frankfurt where he lectured on poetics. His lectures were published one year later under the title Begleitumstände. Frankfurter Vorlesungen [Attendant Circumstances: Frankfurt Lectures]. His literary remains are kept by the Uwe Johnson Archive at the University of Frankfurt.