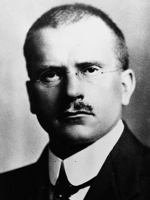 Carl Gustav Jung was born in 1875 in Kesswil, Switzerland. He studied medicine and worked from 1900 to 1909 at the psychiatric hospital of the University of Zurich. He was a lecturer at the same university from 1905 to 1913, an honorary professor at the ETH Zurich between 1933 and 1942, and, in 1943, a full professor for psychology in Basel. Together with Sigmund Freud and Alfred Adler, he was one of the three pioneers of the modern depth psychology. After the separation from Sigmund Freud in 1913, Jung developed his own school of analytical psychology. Carl Gustav Jung died on June 6th, 1961, in Küsnacht.