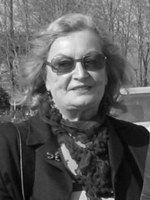 Helena Kadare was born in 1943 in Fier. She studied Literature at Tirana University and was employed as a journalist in the publishing industry. In 1970, she was the first women to publish a novel in Romanian. Helena Kadare has lived in Paris with her husband, the Albanian author Ismail Kadare, since 1990.

There, she wrote the novel Një grua nga Tirana [A Woman From Tirana], which appeared in French (Une femme de Tirana) in 1995, and in German (Eine Frau aus Tirana) in 2009 with the support of TRADUKI.