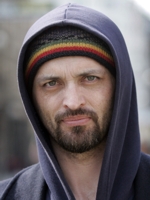 Damir Karakaš, born in 1967 in Plašćica (Lika region, Croatia), studied Agronomy, Law and Journalism in Zagreb. He initially worked for the newspaper Večernji list, and later reported as a war correspondent from the fronts in Croatia, Bosnia and in Kosovo. In 2001 he went to France, where he lived off playing the accordion for five years and began to study French at the Sorbonne. Damir Karakaš has published several books, including novels, stories and a volume of travel prose. In 2008 an award-winning film, directed by Dalibor Matanić was released, based on his volume of short stories, Kino Lika. In addition, numerous theatre plays appeared, inspired by his works. Some of his stories have been translated into French and English. Damir Karakaš now lives in Paris und Zagreb.