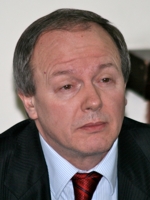 Enes Karić was born in 1958 in Višnjevo near Travnik in Bosnia and Herzegovina. He studied Political and Islamic Sciences in Sarajevo and gained his Ph.D. at the University of Belgrade. Karić is now Professor at the Faculty for Islamic Sciences at the University of Sarajevo. He has spent several periods abroad for research purposes, including Cairo, Yale, Oxford and Santa Barbara, and was guest associate professor at the Karl Franzens University Graz, the University of Ljubljana and the Ludwig Maximilian University, Munich. Karić is editor and member of the scientific advisory board of several Islamic scientific journals, including international ones, and has been appointed Unesco expert for Islamic Culture. From 1996 to 1998 Karić was Minister for Education, Science, Culture and Sport in Bosnia and Herzegovina.

He has published numerous scientific articles and monographs, but also translations from Arabic and English, as well as two novels.