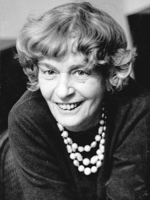 Marie Luise Kaschnitz was born in 1901 in Karlsruhe. She was raised in Potsdam and Berlin and trained as a bookseller after completing secondary school. She then worked for a Munich publishing company and a second-hand bookshop in Rome. She alternated between living in Königsberg, Marburg, Frankfurt on the Main and Rome.