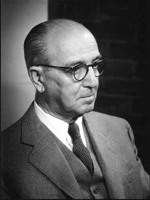 Hans Kelsen, born in 1881 in Prague and raised in Vienna, is one of the most important legal scholars of the 20th century. He studied law and public governance at the University of Vienna, where he was professor between 1919 and 1930. Later he lectured in Cologne, from 1933 to 1940 in Geneva, and from 1936 to 1938 in Prague. In the time he was teaching in Vienna, he also served as a constitutional judge. From 1945 to 1952 he was a professor in Berkeley, California, where he died in 1973. Hans Kelsen’s area of work were various aspects of law, especially legal theory, sociology, political science, and state law.