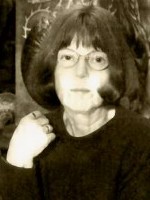 Sarah Kirsch was born as Ingrid Bernstein in 1935 in Limlingerode. In 1960 she married the poet Rainer Kirsch and began to publish lyrical texts under the pseudonym, Sarah. She wrote her first volume of poems with her husband, her own first volume of poems followed in 1967. After her divorce in 1968 she moved to East Berlin and became a board member in the Writers’ Association of the GDR. When she was excluded from the SED in 1976 she went to West Germany, where she continued her writing career very successfully. She received numerous renowned awards and had been a member of the Free Academy of Arts Hamburg since 1992. In 1996, she received a yearly Brothers-Grimm-Professorship in Kassel. She had lived in Tielenhemme in the German region of Schleswig-Holstein since 1983. Sarah Kirsch died on May 5th, 2013.