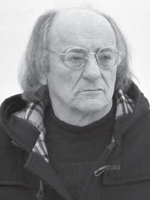 Mirko Kovač, (1938-2013) was born in Petrovići by Nikšić (Montenegro). He studied dramaturgy at the Academy of Theatre, Film and Television in Belgrade. Towards the end of the 1980s, he moved to Croatia and has been living in Rovinj since 1991. He has written numerous novels, short stories and essays, as well as scripts for film and television. His books have been translated into German, French, Italian, English, Swedish, Dutch, Polish and Hungarian, among other languages. Mirko Kovač has received numerous awards, including the Swedish Tucholsky Prize (1993), the Herder Prize for Literature (1995), the Meša Selimović Prize (2007), the Croatian Vladimir Nazor Prize (2008) and the highest distinction of Montenegro, Trinaestojulska nagrada (2008).