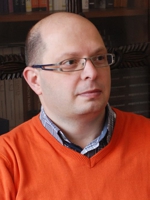 Alen Kristić was born in 1977 in Sarajevo. He holds a Master’s Degree in theology and is one of the founders of the theological magazine Concilium that covers Croatia and Bosnia-Herzegovina. He works as the editor there and he also edits the magazine for political culture and social questions Status from Mostar and the magazine Bobovac from Vareš. In his scientific work, he focuses on the peace potential of religions, world ethos, dialogue between Christianity and Islam, political theology, formation of the religious from the remains of socialism, the role of women in the sphere of religion as well as on Liberation Theology. Alen Kristić has written many scientific works and translated several from German and English. Among others, he translated Ethik by Dietrich Bonhoeffer and Gnosis und Christentum by Christoph Markschies.