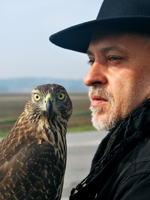 Franc (Feri) Lainšček, born in 1959 in the village Dolenci in the northeastern corner of Slovenia, studied Journalism at the University of Ljubljana. He has been a freelance writer since 1983, and an editor in the publishing house Franc-Franc in Murska Sobota since 2007. Feri Lainšček’s opus as a writer is immense and many of his novels were made into films. The film Petelinji zajtrk [Rooster’s Breakfast] made after the book with the same title was the most viewed film in Slovenia since Slovenia’s independence.