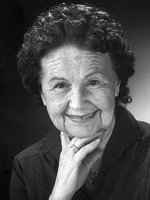 Auguste Lechner descended from the Austrian family of civil servants, Neuner von Breitenegg. She studied languages at Innsbruck University and later on wrote a series of folktales. After the Second World War she turned to books for young people, by making sagas and myths of the Ancient World and the Middle Ages accessible to a young audience, and after just a few years had already become one of the most read authors in Austria. She was awarded the Austrian State Prize for Literature for Children and Young People for her Parzival novel “Das Licht auf Monsalvat” [Light on Monsalvat] (1956), other works have been included in various rolls of honour. Auguste Lechner died on 25 February 2000 in Innsbruck.