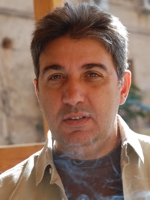 Arian Leka, born in 1966, studied Music in his place of birth, Durrës and Albanian Language and Literature in Tirana. He writes poems, short stories, novels and children’s literature and has translated the works of the Italian Nobel prize winners Eugenio Montale and Salvatore Quasimodo into Albanian. Some of his previous 14 books and parts of his works have been translated into Italian, English, German, French, Romanian, Bulgarian and Croatian. In 2004 he founded the International Poetry and Literature Festival, POETEKA, and since then has been the Chief Editor of the literary journal of the same name. Arian Leka has received several grants and prizes at home and abroad, including the prize of the Albanian Culture Ministry, which is one of the most highly regarded awards in Albania.