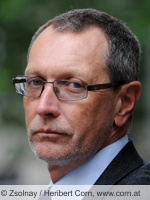 Konrad Paul Liessmann, born 1953 in Villach, is professor at the Institute of Philosophy of the University of Vienna, essayist, literary critic and cultural journalist. In 2004 he received the Honorary Award of the Austrian Book Trade for Tolerance in Thought and Action and in 2010 the Donauland Nonfiction Book Award. He publishes the series Philosophicum Lech with the Zsolnay publishing company. His Theorie der Unbildung [The Theory of Ignorance] (2006) was a great success and has been translated into many languages.