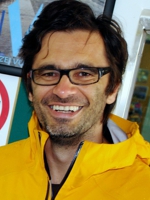 Nicol Ljubić was born in 1971 in Zagreb. As a son of a aviation technician, he grew up in Sweden, Greece, Russia and Germany. He studied political science and worked as a freelance journalist and writer. He received several awards for his reportages, including the Theodor Wolff Preis. For his novel, Stillness of the Sea, published in 2010, he received the Adelbert von Chamisso advancement award and the ver.di Berlin-Brandenburg literature prize. He is the editor of the anthology Schluss mit der Deutschenfeindlichkeit! [Enough of the Anti-German Sentiment!], published in 2012.