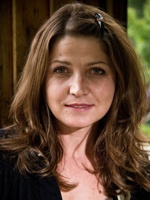 Luljeta Lleshanaku, born in 1968 in Elbasan, studied Language and Literature in Tirana, where she now lives. She translates from American English and is employed by the newspaper Rlindja. During the time of the communist dictatorship, she was subject to harsh law enforcements and couldn’t begin her university studies until after the fall of Enver Hoxha. Since 1993 she has had eight poetry anthologies  published. She received the Kristal Vilencia Award in 2009 for her lyrics.