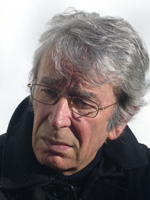 Mladen Lompar was born in 1944 in Cetinje, Montenegro, where he has been living and working up to this day. He studied at the Faculty of Arts in Belgrade. He is the Chairman of the Montenegrin PEN Centre, acting President of the Academy of Arts and Sciences of Duklja, member of the Association of Independent Writers of Montenegro and head editor of the “Ars” magazine for literature, culture and society. He published ten books of poetry that have been translated to several languages and earned him many awards. He also writes critiques and essays.