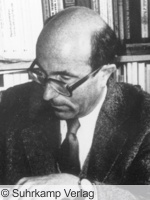 Niklas Luhmann, born in 1927 in Lüneburg, is one of the most eminent proponents of sociological systems theory from German speaking countries. At 17, he was conscripted in the Luftwaffe auxiliary personell and was a US prisoner of war in 1945. After the war had ended, he studied law in Freiburg. Between 1954 and 1962, he worked as a clerk in the Higher Administrative Court Lüneburg and in the Ministry of Education of Lower Saxony. During a scholarship at Harvard, he got in contact with Talcott Parsons and his structurally functional systems theory. One year later, Luhmann published his first book, Functions and Consequences of Formal Organization, whereupon he got a position of Head of Department at the social research unit in Dortmund. His first and second book, Law and Automation in Public Administration, were accepted as doctoral and habilitation dissertations by the University of Münster in 1966. From 1966 to 1993, Luhmann was Professor of Sociology at the University of Bielefeld. His magnum opus, Gesellschaft der Gesellschaft (Theory of Society), was published in Germany in 1997. Niklas Luhmann died on November 6, 1998, in Oerlinghausen near Bielefeld.