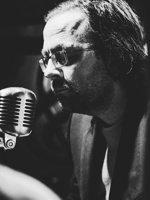 Gašper Malej was born in 1975 in Koper (Slovenia) and he continues to live there as a freelance writer and translator. He translates mostly from the contemporary Italian literature. He is a founding member of the cultural association KUD AAC Zrakogled. Since 2011, he has been in charge of Zrakogled’s book series Helia, in which translations of contemporary literature from the Mediterranean are published. He has written two books of poetry: Otok, slutnje, poljub (2004) and Rezi v zlatem (2009). His poetry has been translated into twenty languages and has been anthologized in Slovenia and abroad. Malej received the 2011 Zlata ptica award for his translation of Pier Paolo Pasolini’s novel Petrolio. In 2016, he received a translation prize awarded by the Italian ministry of Culture and Tourism.