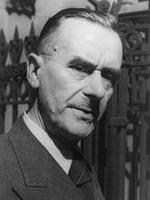 Thomas Mann, born in 1875 in Lübeck, is one of the most important writers of the 20th century. With him the modern German novel became part of world literature. Mann’s multi-layered works have evoked a positive response worldwide, which is hard to surpass. From 1933 he lived in exile, firstly in Switzerland, then in the USA. Mann only returned to Europe in 1952, where he died in Zurich in 1955.