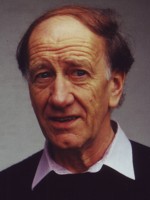 Christian Meier, born in 1929 in Stolp, Pomerenia, is one of the most well known historians in Germany. He qualified as a professor in Frankfurt and taught as a professor in Freiburg, Basel, Cologne, Bochum and Munich. Christian Meier has published a series of scientific publications and is the editor of several omnibus volumes. He has received many awards for his work, including the Jacob Grimm Prize (2003), the Austrian Cross of Honour for Science and Art (2006), the Reuchlin Prize (2007) and the Lichtenberg Medal (2009).