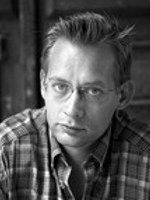 Clemens Meyer, born in 1977 in Halle, grew up in Leipzig and studied there at the German Literature Institute. He financed his studies as a security guard, removal man and forklift operator. Grants enabled him to work on his first novel Als wir träumten (title of the English translation: While We Were Dreaming), for which he received the Rheingau Literature Prize, the Mark Brandenburg Grant for Literature, the sponsorship award for the Lessing Prize, as well as the Mara Cassens Prize. In 2008 he was awarded the  Leipzig Book Fair Prize for Die Nacht, die Lichter (title of the English translation: All the Lights). The adaptation of this volume of short stories was performed for the first time in 2010 at the Leipzig Centraltheater. His third book was also published in 2010 under the title Gewalten (title of the English translation: Acts of Violence). Clemens Meyer lives in Leipzig.