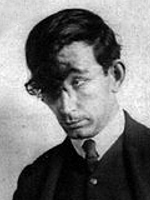 Geo Milev, born in 1895 in Radnevo, is regarded as one of the most important Expressionist poets and authors in Bulgaria. He has studied in Sofia and Leipzig. After the First World War he began to work for the magazine Die Aktion in Berlin. In 1919 he returned to Bulgaria and founded the art journal Vesni there. In 1922 he applied for admittance to the Bulgarian Communist Party and from 1924 edited the journal Plamak. He was charged and sentenced on the basis of his poem September about the 1923 brutally suppressed Communist uprising. When he was taken in for an interrogation in May 1925 he never came back. Around 30 years later his skull was found in a mass grave near Sofia.