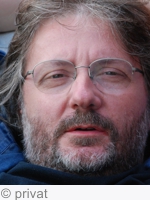 Vinko Möderndorfer, born in 1958 in Celje, Slovenia, is a writer, poet, playwright, and film and theatre director. He studied at the Academy for Theatre, Radio, Film, and Television in Ljubljana. Since the early 80s he has published a string of prose works, essays and plays, as well as several collections of poetry and children books. In 2000 he was awarded the Prešeren Prize for his collection of stories Nekatere ljubezi [Some Loves] and in 2003 the Rožanc Prize for Gledališče v ogledalu [Theatre in the Mirror].