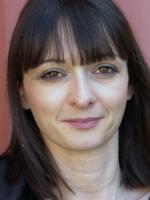 Tanja Mravak, born in 1974 in Sinj in Croatia, works in a Centre for Autism in Split. She became known as a writer in Croatia when she made her literary debut with the volume of short stories Moramo razgovarati: in addition to other awards in 2011 she received the prestigious literary prize for the best fiction book of the year from the newspaper Jutarnij list – as the first woman, at that time, in the eleven-year-history of the prize.