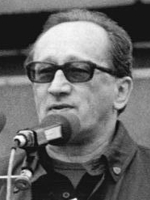 Heiner Müller was born in 1929 in Eppendorf. He settled in East Berlin in 1950, where he first worked as a journalist and since 1995 as a dramatist. Strongly influenced by Brecht, the focus of his “stories from the production”, as he termed his pieces, were the problems of the development of the socialist society. In 1961, he was excluded from the author association of the GDR, whereupon he went back to ancient and classical material especially and worked on Sophocles and Shakespeare. From 1970 to 1976, he was the dramatic adviser of the Berliner Ensemble. Heiner Müller died in 1995 in Berlin. Awards: Heinrich Mann Prize (1959, together with Inge Müller) Lessing Prize of the GDR (1975), Georg Büchner Prize (1985), National Prize First Class for Art and Culture (1986), Kleist Prize (1990), European Theatre Prize (1991), Theatre Prize Berlin (1996, posthumous).