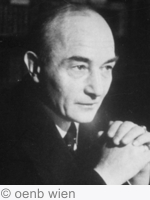 Robert Musil was born in 1880 in Klagenfurt. He studied at the technical military academy in Vienna. After he had quit his military education, he worked as a mechanical engineer. From 1903 to 1908, he studied philosophy, maths, and physics in Berlin. He worked as a librarian and as an editor at the Neue Rundschau. He was an officer during World War I and was publishing the “Soldatenzeitung” from 1916-1917. From 1918 to 1922, he was a civil servant in Vienna, and later a writer, theatre critic and essayists living in Vienna and Berlin. After the Nazi German annexation of Austria, Musil emigrated to Zürich. He spent his last years almost penniless in Geneva and died there in 1942.