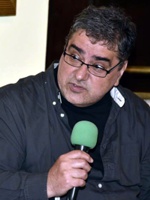 Jovan Nikolić, born in 1955 in Belgrade, travelled as a child through the former Yugoslavia with his musical parents, his father a Roma and his mother a Serb. His first book appeared in 1982. At this time he was living in Belgrade, where he wrote plays for the theatre and worked as an actor, musician and song lyricist. In 1999 Nikolić firstly emigrated to Berlin, later to Cologne. He is now one of the most well-known Roma authors and until now has published eleven volumes of poetry and prose. His poems have been translated into ten languages and included in several international anthologies. He has received numerous grants and is a member of the Serbian P.E.N. centre in Belgrade. Since 2002 he has also been Vice-President of the “International Roman Writer‘s Association” (IRWA, Helsinki) as well as staff member of the organisation Rom e.V. in Cologne.