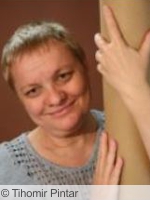 Maja Novak, born in 1960 in Jesenice and raised in Nova Gorica, studied Business Law in Ljubljana and initially worked as a business secretary in Jordan, before returning to Slovenia and settling down. Today she works as a writer, translator, and journalist in Ljubljana. Her first short-stories were published at the beginning of the 90s. Several novels followed, including Izza kongresa, ali umor v teritorialnih vodah [Behind the Congress or Death in Territorial Waters], Cimre [Flatmates], Karfanaum, and Mačja kuga (The Feline Plague), as well as children books and a collection of short fiction. Maja Novak is also a columnist for the weekly magazine Mladina and translates literary works from the French, Italian, Serbian, and English into Slovene.