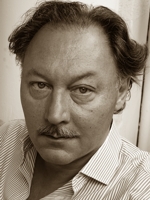 Haralampi G. Oroschakoff, born in 1955 in Sofia, comes from an old Russian family. He grew up in Vienna and Cannes and now lives, after many years in Munich, in Berlin and on the Côte d’Azur. Having worked since 1981 as an artist, illustrator and writer, he is now making a name for himself in the international art scene with his installations. After the fall of the Berlin Wall, as a “Migrant between the two worlds”, he increasingly devoted himself to literature and the intercultural-theoretical debate. Haralampi G. Oroschakoff has published numerous texts in newspapers and magazines and several books. After ten years of work, his family saga Die Battenberg-Affäre [The Battenberg Affair] was published in 2007.