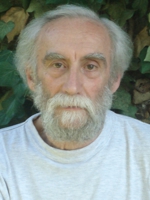 Josip Osti was born in 1945 in Sarajevo, which was then in Yugoslavia. He studied at the Faculty of Arts at the University of Sarajevo. He worked as a reader in a publishing house, was the manager of the Sarajevo Poetry Days and the president of the “United Translators of Bosnia and Herzegovina.” Since the late 1980s, he has been living in Slovenia and working as a freelance writer and translator. He writes prose, essays, critiques and above all poetry. His poems have been translated into numerous languages. In 1994, he received the renowned Vilenica Prize.