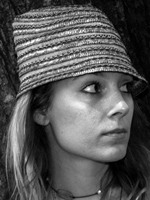 Maja Pelević, born in 1981 in Belgrade, studied Theatre Sciences and worked for three years as a Dramatic Adviser at Belgrade National Theatre. She is Editor of the theatrical journal “Szene” and co-initiator of an internet platform for new Serbian plays. She is very popular as an author in Serbia, her plays are frequently shown and have won several prizes, including Orangenhaut 2010 [Orange Peel Skin], which was honoured as the best current Serbian play of the year at the theatre festival in Novi Sad. Her plays are also well-regarded internationally, and Orangenhaut [Orange Peel Skin] has already been translated into several languages. Maja Pelević lives in Belgrade.